Decision-making expressions are those which let programmers choose which statement to execute under different circumstances. Conditional statements are used in different programming languages to inform the computer on what factors to make when certain conditions are met. These decisions are taken only if the already stated conditions are true or false: it depends on the functions in the mind of the programmer. The if statement, if-else statement, and if-else-if statements are often used in Dart to introduce the conditional implementation of statements based on one or more Boolean expressions.

How to use the conditionals in the dart in Ubuntu 20.04?

This example starts with the main function where we have implemented if conditional statement. First, we have defined a variable “myNumber” which has the integer value stored in it. After that this variable is utilized inside the if condition. The if has the condition that the variable “number” should be greater than the number “20”. As we have the number “30” greater than the number “20” so the if block returns a print statement. If in case our condition becomes false, then nothing will be executed.

The true statement of if-condition is executed as follows:

If the Boolean expression inside the “if” is true, the script inside the if block is executed, and further execution proceeds with the conditions next to the if-else block.

In the above dart script, we have first defined the main function. The main function has the integer type variable declared as a “number” to which we have assigned a numeric value. Through the print statement, we have displayed the number inside the variable. Then, we have the if-else representation. The if has the condition given that the variable “number” should be greater than “20”. Inside the if block, the print statement will be executed upon the condition that returns a true value. If the condition returns a false value, then else block will be executed and the if block will be ignored.

As the variable “number” has the value “15” which is not greater than the number inside the if the condition is “20” so the if condition becomes false here. Hence, the else block is executed as follows.

If-Else-If ladders can have a ladder of else-if blocks, but only if a block is required which is at the start and one else block at the optional end.

The Boolean expressions are checked one by one during the execution. If the Boolean condition is true, the associated block of statements is executed; otherwise, the program control moves to the next Boolean in the ladder to be evaluated. The else block is executed if either of the Boolean evaluates is true. 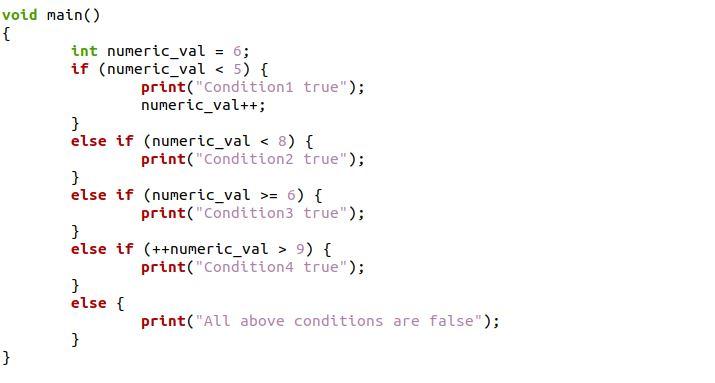 The program has the main function definition where at the initial step, we have constructed a variable as “numeric_val” with the data type “int”. Then, we have the ladder of the if-else statement. The first statement is the if-statement where the condition is defined as the numeric_val Ilesser than the number “5”. If that condition is true, then our first if-condition is executed. Similarly, it considers the second if condition. If it is true, it executes the statements within its block and moves control to the next statement; otherwise, it checks another if condition. Finally, if no if-condition evaluates to true, the statements within the else block are executed and control is passed to the next statement.

From the above if-else ladder, condition2 is true so the if-condition block is executed on the shell of Ubuntu as follows:

In this dart script, we have the variable “Age” of int data type and the variable contains the integer value within the dart main function. Then, we have the if expression, and the if expression is passed with the condition that “age” should be greater than the number “20”. Inside the if block we have first incremented the variable “Age” and then defined the if-else condition within the existing if expression. If the true results are returned from the nested if expression, then the if statement is executed, otherwise the else block is created for the false returned results. If the main if-condition results are false, then the nested if the condition is ignored and nothing will be executed from the above dart script.

As our main if-expression has the true results so the condition is entered into the if-condition block where we have if-else expressions. Inside the if expression our condition fails so the else is executed in the below shell.

Coding without conditionals forces you to think outside the box. You will have to find new ways to frame your code to try and make it more understandable. It can also assist you in gaining knowledge about computation and/or object-oriented approaches. We have driven all the conditional exists in the dart programming language with the example. We are hoping that there will be no uncertainty with the dart conditionals. 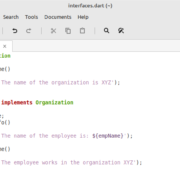 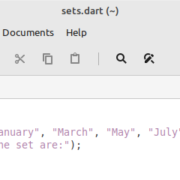