SAN FRANCISCO – August 11, 2022 –  Today, the ELISA (Enabling Linux in Safety Applications) Project announced that Boeing has joined as a Premier member, marking its commitment to Linux and its effective use in safety critical applications. Hosted by the Linux Foundation, ELISA is an open source initiative that aims to create a shared set of tools and processes to help companies build and certify Linux-based safety-critical applications and systems.

“Boeing is modernizing software to accelerate innovation and provide greater value to our customers,” said Jinnah Hosein, Vice President of Software Engineering at the Boeing Company. “The demand for safe and secure software requires rapid iteration, integration, and validation. Standardizing around open source products enhanced for safety-critical avionics applications is a key aspect of our adoption of state-of-the-art techniques and processes.”

As a leading total aerospace company, Boeing develops, manufactures and services commercial airplanes, defense products, and space systems for customers in more than 150 countries. It’s already using Linux in current avionics systems, including commercial systems certified to DO-178C Design Assurance Level D. Joining the ELISA Project will help pursue the vision for generational change in software development at Boeing. Additionally, Boeing will work with the ELISA Technical Steering Committee (TSC) to launch a new Aerospace Working Group that will work in parallel with the other working groups like automotive, medical devices, and others.

“We want to improve industry-standard tools related to certification and assurance artifacts in order to standardize improvements and contribute new features back to the open source community. We hope to leverage open source tooling (such as a cloud-based DevSecOps software factory) and industry standards to build world class software and provide an environment that attracts industry leaders to drive cultural change at Boeing,” said Hosein.

Linux is used in all major industries because it can enable faster time to market for new features and take advantage of the quality of the code development processes. Launched in February 2019, ELISA works with Linux kernel and safety communities to agree on what should be considered when Linux is used in safety-critical systems. The project has several dedicated working groups that focus on providing resources for system integrators to apply and use to analyze qualitatively and quantitatively on their systems.

“Linux has a history of being a reliable and stable development platform that advances innovation for a wide range of industries,” said Kate Stewart, Vice President of Dependable Embedded Systems at the Linux Foundation. “With Boeing’s membership, ELISA will start a new focus in the aerospace industry, which is already using Linux in selected applications. We look forward to working with Boeing and others in the aerospace sector, to build up best practices for working with Linux in this space.”

The ELISA Project has several upcoming events for the community to learn more or to get involved including:

About the Linux Foundation

This guide will show you how you can install Wine on your Raspberry Pi device and install Windows applications with ease.

How to run Windows Applications on Raspberry Pi using Wine

Before installing any application, ensure that your packages are updated. To confirm it, execute the following command:

Wine works on i386 architecture and if you are using other architecture you will need to change it using the following command:

After completing the above steps, you can install Wine on Raspberry Pi using the following command:

Enter “Y” to begin the Wine installation on your Raspberry Pi device.

After completing the installation, open Wine configuration on your Raspberry Pi device using the following command: 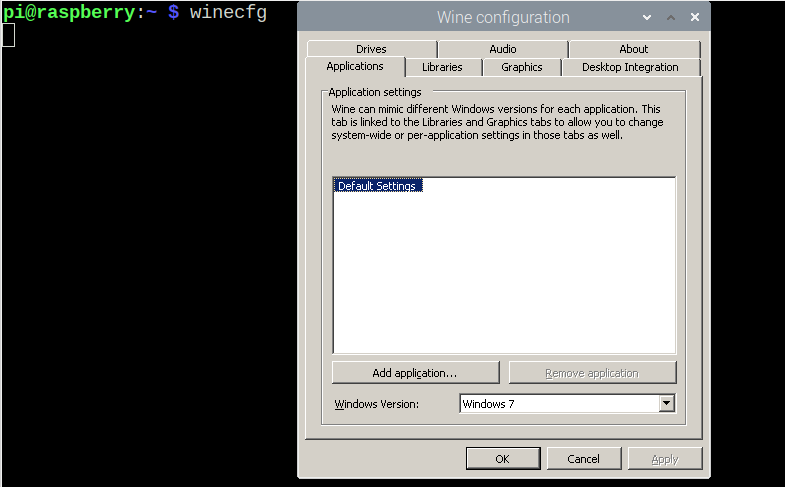 The above command will open the Wine configuration. You can select your Windows version according to your choice.

Now, to install an application on Raspberry Pi, you will first need to download a Windows application in “.exe” format.

In our case, we are going to download the VLC media player as an example for you to learn how you can install Windows applications. After the download, look for the location where your file is downloaded. It may differ in your case, but mostly, it’s located in the “Downloads” directory.

To install the application, first visit the location in the terminal using the following command:

Then use the following command to run the application using Wine. 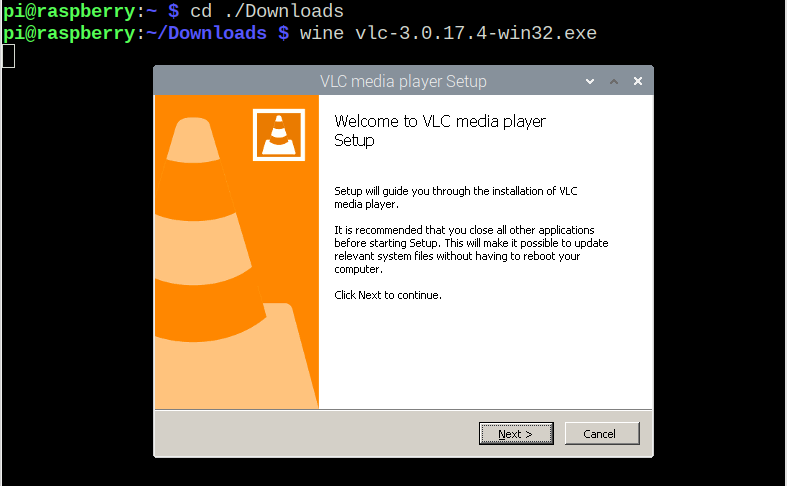 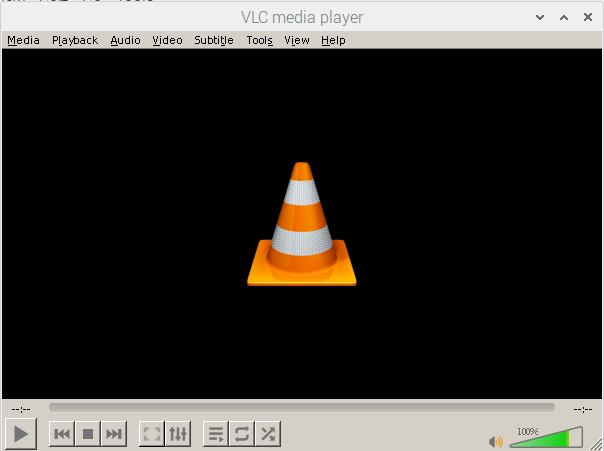 In this way, you can install multiple Windows applications with ease.