The list is a popular Redis data type that stores a sequence of strings based on the insertion order. One list can hold more than 4 billion elements. The unique fact about the Redis list is it maintains the HEAD and TAIL properties where the elements can be inserted from both sides. Usually, the LPUSH und RPUSH commands are used to insert the elements into a list. Meanwhile, the brand new list is created with the specified key. All the list commands behave the same way where a new list is created when passed with a non-existing key. 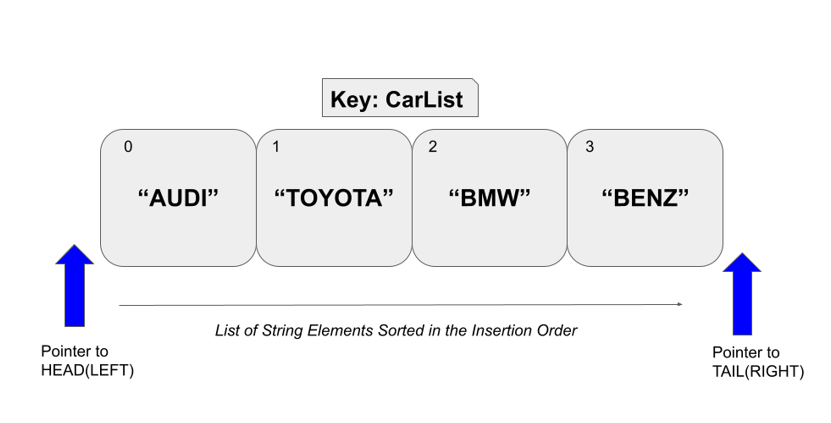 In addition, when all the elements are popped from the list, the associated key will be deleted from the Redis key space. Redis list is the ideal candidate for the low latency applications because the insertion and deletion operations have constant time complexity at the HEAD und TAIL. It doesn’t matter if five or thousand elements are in the list. The time for the insertion and deletion takes a constant time near the left and right ends.

There are some practical needs to remove the elements from the tail or head of a given list. The BRPOP und BLPOP commands are introduced from the Redis version 2.0.0 to fulfill the mentioned requirement. The BRPOP command is evaluated in this guide. 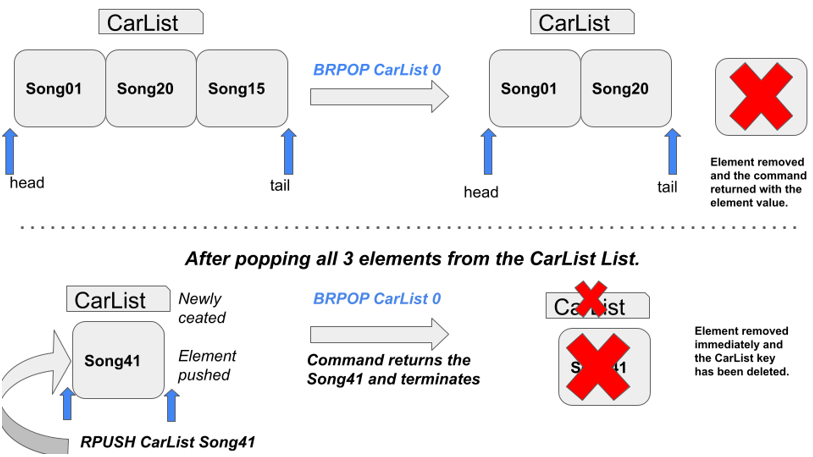 The following is the syntax for the BRPOP command:

list_key: This is the key of the list.
timeout: This is the timeout value in seconds where the client is blocked until this timeout reaches.

If a non-empty list is specified, the command returns the popped element value and the key of the containing list as in the following format:

When no single element is to be popped from any of the lists specified and the timeout has expired, the nil value is returned.

Let’s assume that a radiodifusión station needs to play songs from a daily playlist. The playlist contains the song IDs to play. The songs should be ordered in the insertion order. Each song is picked from the end of the playlist to play.

We can use the Redis list data structure to implement the mentioned playlist and the list operations to manipulate the playlist songs. Let’s create a playlist called MidNightPlaylist and add some song IDs as shown in the following. The LPUSH command is used for that:

This would create a list as shown in the following:

Non-Blocking Behavior of the BRPOP Command

The timeout argument is specified as five seconds. Since the MidNightPlaylist contains elements, the BRPOP command behaves in a non-blocking way. Hence, it pops and returns the tail element to the client.

Blocking Behavior of the BRPOP Command

The previous results can be achieved through the RPOP command as well. Hence, let’s look into the vivo advantage of the BRPOP command with the blocking behavior. Let’s remove all the elements from the MidNightPlaylist key using the RPOP command.

This removes all the remaining elements from the list and the MidNightPlaylist key is deleted from the Redis key space as well.

Let’s execute the BRPOP command with 60 seconds timeout and the non-existing key MidNightPlaylist. Now, the command behaves in a blocking manner. It waits for the key to be created and the element to be present in the playlist MidNightPlaylist.

Let’s push an element to the MidNightPlaylist via another terminal window that is connected to the same Redis data store.

Pick a Song from Multiple Playlists

Let’s call the BRPOP command with all the three keys as shown in the following:

The BRPOP command has constant time complexity near the head and tail when a single key is specified. The time complexity becomes O(N) when multiple keys are specified in the command. Furthermore, this command is very efficient to use in the low latency applications such as a queue, stack, timeline in social media, etc.

To summarize, a Redis list is a collection of string elements stored at a given key while sorted in the insertion order. Several commands are available to operate on the Redis lists with constant time complexity near the head and tail. As stated, The BRPOP command is used to remove the elements from the right side of the Redis list stored at a given key with the support of blocking. The BRPOP command blocks the client connection when no elements are available to remove from the specified lists. As you know, this command accepts multiple keys where an element pops from the first non-empty list where each key is checked in the order in which they are passed to the command.