Nintendo 64, often referred to simply as N64, is one of the most loved video game consoles of all time.

With hit games like Super Mario 64, The Legend of Zelda: Ocarina of Time, or GoldenEye 007, the console ushered in the era of true 3D graphics; and that’s just one of its many achievements.

It’s no surprise then that there are many gamers who fondly remember all the fun they had when sitting in front of a CRT TV with the iconic Nintendo 64 controller in their hands.

Regardless if you count yourself among them or just want to see what the Nintendo 64 era was all about, you can do so with any decent Android smartphone and one of the best N64 emulators for Android.

M64Plus FZ Emulator, also referred to as Mupen64Plus FZ Edition, has quickly become the most popular Nintendo 64 emulator for Android.

The emulator can run most games with little to no issues. Performance is surprisingly good even on devices that don’t exactly have a whole lot of processing power to spare.

RetroArch is an emulation powerhouse with support for a number of emulators and game engines, including the Mupen64Plus-Next and ParaLLel N64 cores. This make it possible to play most Nintendo 64 games.

Unfortunately, the version of RetroArch that can be downloaded from the Google Play Store doesn’t come with the core downloader component, so you’re better off using the one that’s available on the project’s official website.

Despite its impressive emulation capabilities, RetroArch doesn’t cost a single dollar to use, and it doesn’t even contain ads. The only downside is that its initial setup and configuration can be somewhat challenging.

Lemuroid is based on the same application programming interface (API), libretro, as RetroArch, so it supports the same systems, including Nintendo 64.

Unlike RetroArch, which is a cross-platform project that runs on Android, iOS, Windows, macOS, Linux, and many other operating systems, Lemuroid is designed from the ground up for Android-based devices, so it’s better in terms of usability.

Super64 Plus is another popular and well-rated Nintendo 64 emulator for Android. It comes with a selection of video plugins that you can use to fix graphical glitches. Its resizable imaginario control buttons make gaming without a physical controller tolerable. However, Super64 Plus hasn’t been updated since 2021, and we don’t know if it ever will be.

Despite not being updated since 2021, Mega64 Plus Emulator’s download count keeps increasing. It is offering the Mupen64 Plus emulation core together with an attractive user interface that makes Nintendo 64 emulation accessible to everyone. The free version is great for those who are just getting started, while the paid version offers some additional useful features. 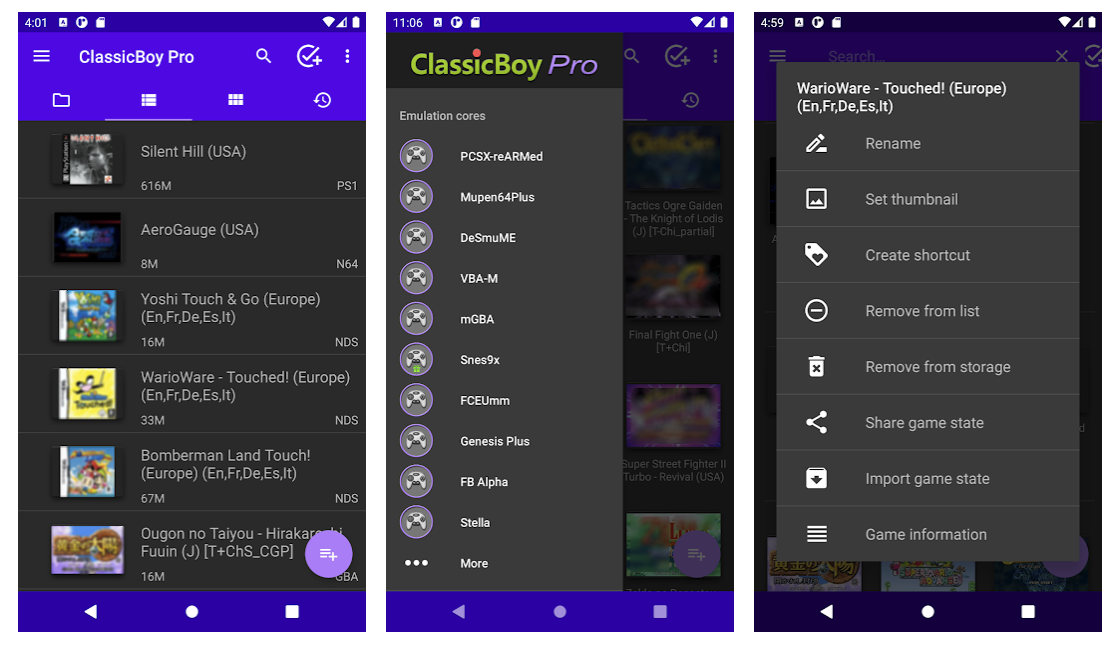 Requires Android: 4.3 and up

Despite its name, ClassicBoy Pro can emulate a broad range of video game consoles, from Nintendo Entertainment System (NES) and Game Boy to PlayStation and, of course, Nintendo 64. The free version of the app lets you play any game you want from start, and you can upgrade to the paid version to unlock the ability to resume game states from auto-saves and save slots.

In 2022, Android users can play their beloved Nintendo 64 games using several excellent emulators, some of which don’t cost anything at all. Just keep in mind that N64 emulators for Android don’t come with any games—it’s up to you to provide them yourself.

What is the best Nintendo 64 emulator for Android?

The best Nintendo 64 emulator for Android right now is M64Plus FZ Emulator. Other good options include RetroArch, Lemuroid, and Super64 Plus.

Are Nintendo 64 emulators for Android admitido?

Yes, Nintendo 64 emulators for Android are admitido because they don’t come with any Nintendo 64 games or other licensed software.

How to obtain Nintendo 64 ROMs?

To play emulated N64 games on your Android device, you need copies of game cartridge data, typically referred to as ROMs. Ideally, you should create ROMs from cartridges that you own, but there are websites that distribute ROMs created by other people.

The admitido status of ROMs in universal is questionable at best, so you better check your específico laws before you download a Nintendo 64 ROM from the internet or even create one from a cartridge you own.

How to improve performance when playing N64 games on Android?

Nintendo 64 emulation can be very resource-intensive, but there are some things you can do to improve performance. You can, for example, close all background processes, turn on Gaming Mode, and use a faster SD card if that’s where you keep your ROMs.