Heatmaps are colored maps that display data in a two-dimensional format. Color variation is achieved by using hue, saturation, or brightness to portray the varied information on the color maps. This color variation provides the readers with visual information about the size of quantitative values. Heatmaps substitute numbers with colors since the human mind understands views better than the textual data. Considering that humans are primarily visual, it makes sense to present the data in any manner. Heatmaps are simple-to-understand visual representations of data. As a result, data visualization tools like Heatmaps are becoming increasingly popular.

Heatmaps are used to display patterns, variance, and anomalies, as well as to depict the saturation or intensity of the variables. Relationships between variables are depicted via heatmaps. Both axes are used to plot these variables. By observing the color shift in the cell, we can look for the patterns. It only takes numerical input and shows it on the grid, with different data values displayed by the varying color intensity.

Many various color schemes can be used to depict the heat map, each with its own set of perceptual advantages and disadvantages. Colors in the Heatmap indicate patterns in the data, thus the color palette decisions are more than just cosmetic. The finding of patterns can be facilitated by the appropriate color palettes but can also be hindered by the poor color choices.

Colormaps are used to visualize heatmaps since they are a simple and effective way to see data. Diverse colormaps could be utilized for different sorts of heatmaps. In this article, we’ll explore how to interact with Seaborn heatmaps using the colormaps.

In the following python script, we provide the three modules that are necessary for the code to work. Then, we insert the seed value zero into the random function for generating random numbers. We create the field data where the rand function is called that generates a random number in a specified interval for the x-axis and y-axis.  Then, we create a colormap variable where the color_palette created the color “Reds”. In the end, the cmap color is utilized for the heatmap.

The sequential color heatmap is represented like this from the previous script. 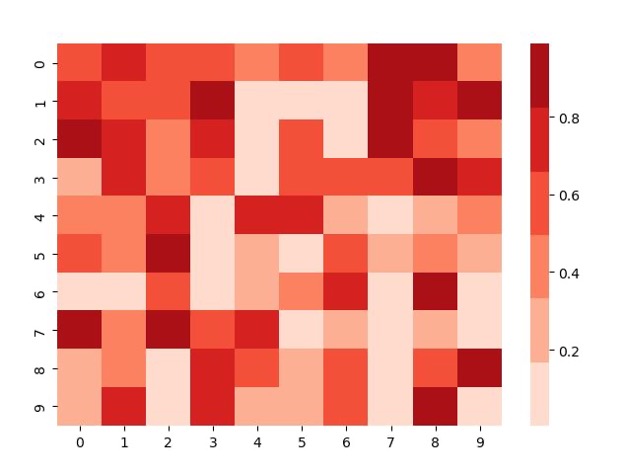 Example 2: Set the Sequential Colormaps with the Cmap Argument Plot

As “Reds” is a built-in colormap in seaborn, it can also be passed straight to the cmap argument.

It’s worth noting that our colormap has a continuous color intensity, as opposed to the previous one, which had a discrete green intensity for a range of possible values. Here’s a deeper look at the colormaps obtained in the heatmaps mentioned in the following illustration:

We passed a zero for the rand seed and generated the random number by using the rand function inside the variable data. We set the interval (15,15) for both the x-axis and the y-axis. Then, we passed an argument cmap which has the color “Blues” inside the heatmap function. This creates the “Blue” color variations of the heatmap.

The Blues’ sequential color intensity plot is shown inside the figure along with the color bar of the specified color. 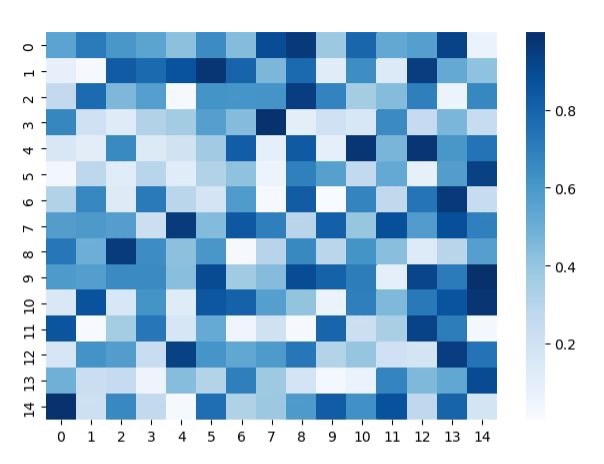 They’re utilized to depict the numeric values that range from high to low (and vice versa), with both the maximum and minimum values being important. On a Seaborn heatmap, the following example explains how to use a diverging colormap.

Here, we import the Seaborn library which is installed in our python language. The Matplotlib library is also used for the visualization of the plot. We have another module which is NumPy for the NumPy features. Then, by utilizing the NumPy module, we have the np.random.seed function which passes a value of zero used to initialize the random numbers.

Inside the variable data, we call a NumPy function rand which set the number limit for both the axes in the plot. Then, we have a Seaborn heatmap function, which takes the argument cmap. The cmap is set with the default color scheme which is the coolwarm colors.

In the following figure, we have a customized heatmap using cmap: 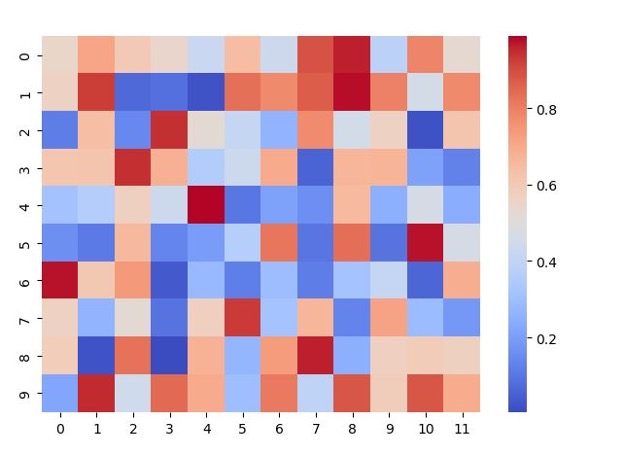 We required the four libraries; the additional library is the pandas for the data frame which we utilize in the code. With the Seaborn, we call a set function here. Then, with the loaded dataset function, the sample dataset flights are added and stored in the df variable.

In the next line, we have a pivot function that takes the column-wise data and groups the data accordingly. We pass the three columns: months, year, and passengers from the flight’s dataset.  Now, invoking the seaborn heatmap function sets the cbar argument to a false value. With the plt show function, the plot is rendered.

The cbar is removed from the heatmap plot in the given figure: 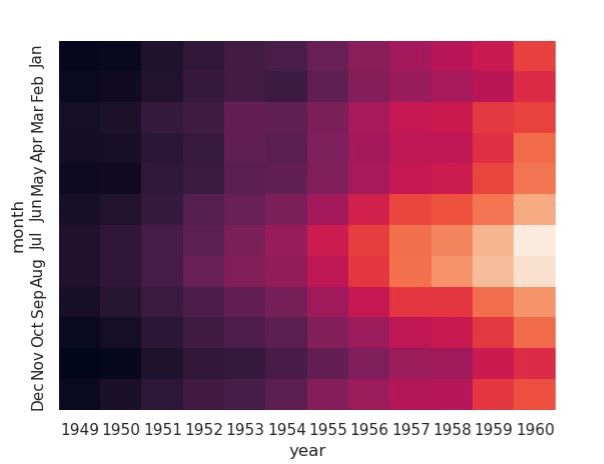 It’s simple to work with the Seaborn heatmaps. We discussed the two types of color maps which include the sequential and diverging color maps. We explained them briefly along with the running example with the Python Seaborn compiler inside the Ubuntu 20.04.