PowerShell is a well-known scripting language supported by all modern operating systems. PowerShell has employed various operations to deal with data. While dealing with data at a small level, you would have observed the data is stored in an excel spreadsheet.

How Does the Import-CSV Cmdlet Work?

Basically, Import-CSV retrieves the information that is presented in separate files and generates a reference list or table. After importing the data, the foreach cmdlet is used to perform functions by iteratively extracting the content of the data in a horizontal manner. The syntax which is used to import CSV files into PowerShell is as follows:

In PowerShell, each parameter has its own importance, which is written in the above syntax and is explained below with a short description.

How to Use the Import-CSV Cmdlet?

The Import-CSV is a powerful utility to manage the data in a CSV file. In this section, we have presented a set of examples to demonstrate the usage of the Import-CSV cmdlet in PowerShell.

Note: As a reference, we are using a test.csv file from which we will show how data is handled using the Import-CSV cmdlet. The test.csv file contains the following data: 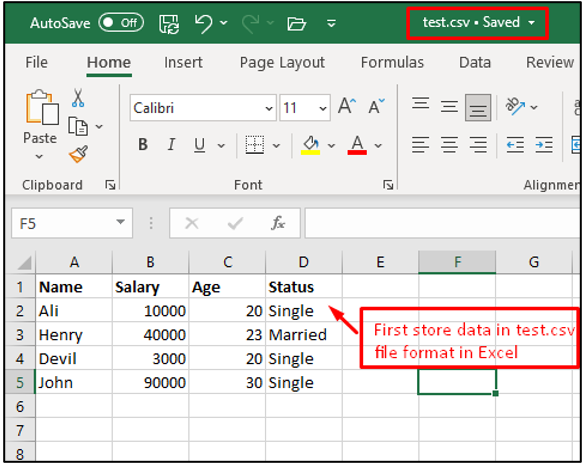 In this example, we are importing all the data stored inside an excel spreadsheet. If you want to import a CSV file, you need to specify its absolute path in the Import-CSV cmdlet. The ft keyword is used as an alternative method to store data in a table. In our case, the following command will help retrieve data from a test.csv file:

The output shows that the data extracted from a file is printed on the PowerShell terminal in a tabular form using the ft keyword.

As an example, the following Import-CSV cmdlet retrieves the data from the file and stores it in a variable. After that, only the Age column from the retrieved data will be printed:

The output shows that only the $Age data is printed on the console.

In this method, we have extracted multiple properties of data using the Import-CSV cmdlet in PowerShell. An example command is provided below.

In the code, first specify the location of the file that is being imported into PowerShell. After that, extract the properties of Salary and Age using the object $file. 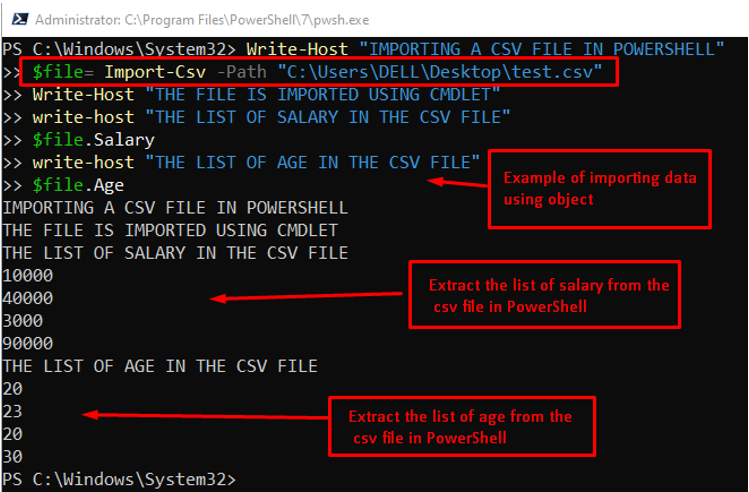 The outcome of the code shows that two properties, Salary, and Age, are extracted from the file and printed on the console.

PowerShell is a Windows built-in command-line application used for task automation and scripting purposes. It is used to perform administrative tasks with the help of a large set of cmdlets, functions, and aliases.

This write-up has covered thoroughly all the concepts of the Remove-Item cmdlet.

How to use the PowerShell Remove-Item cmdlet?

The Remove-Item cmdlet in PowerShell deletes one or more than one item from the specific storage location. It uses the file path for the purpose of deletion of the item. You can delete almost everything such as files, folders, variables, etc.

The path of the file will be provided after the -Path flag. Moreover, a variety of standard parameters can be passed such as Force, Include, and Exclude whose usage is also described in the article.

Example 1: How to delete a single file using PowerShell?

The above line of code will only delete a single file specified by the path you have given.

Example 2: How to delete all files of a directory using PowerShell?

The Remove-Item cmdlet will utilize the wild card “*” to delete all the files located in the folder. To do so, you need to put the “*” in place of the file name and the extension.

The execution of the below command will result in the deletion of all the files in the folder path.

The parameter “-Include” is used by the “Remove-Item” cmdlet to include only the specific files in the deletion operation. The execution of the following command will result in the deletion of the files having a specific extension (.txt). The “*” wildcard will be placed at the end of the specified folder path and also before the .txt extension to remove all the “.txt” files from the directory:

The above line of code will only delete only those file extensions specified by you using PowerShell.

Moreover, you can use the “-Exclude” parameter used by the “Remove-Item” cmdlet to delete the files except for the selected file extensions.

If you want to delete hidden and read-only files then use the command below. The path of the file is given by the “-Path” parameter and the “-Force” parameter helps to remove the hidden/read-only files.

The above command has deleted all hidden and read-only files using PowerShell.

Here you go, you have learned the functionality of the Remove-Item cmdlet in PowerShell.