Different ways of counting the array length have been described in the next part of this tutorial by using examples.”

Create a PERL file with the following code that will count the length of an array by using the “@” symbol. An array of 5 string values has been defined in the code. The total number of array values has been stored into a variable named $length that has been printed later.

The following output will appear after executing the above code. The total number of elements of the array after adding two elements is 6+2 = 8.

The following output will appear after executing the above code. The total number of elements of the array after removing 3 elements is 5-3 = 2.

The way of counting the array values in PERL has been shown in this tutorial by using multiple examples. The PERL user can use any of the ways to find out the array length and use it for solving PERL programming problems.

However, variable-sized arrays are not supported by the C++ standard (until C++11). Array size is a constant expression in the C++11 standard. As a result, the above program may not be an acceptable C++ program. As the GCC compiler has an extension to accommodate them, the program may function with the GCC compiler. As little more, the array size is now a simple expression in C++14 (not constant-expression).

It’s not desirable to have to generate a potentially big array on a stack with limited space. If you are not aware ahead of time, we will write damaging code. Variable-length arrays are not natively supported in C++ because they would necessitate significant type system changes.

Here, in the C++ article, we will show how to overcome the C++ iso forbidden variable-length array error at the compilation time.

Example 1: Program to Implement a variable-length array in C++ With GCC Compiler

We have C++ header files in the first step and the namespace file. After that, we have the program main method, and the main body has the pointer variable declaration as “Array” and the other variable “Arr_Size” declaration. The cout prints the statement that asks the user a number for array size. Then, cin will take the number value from the user. The variable “Array” is called where we have set the size of the array.

Now, we have also requested the array values from the user. The array value will iterate by the for loop till it reaches the array size. Then, the second for loop is used to print the values inside the array, and at the same time, we have deleted the array by using the delete[] expression in the program. 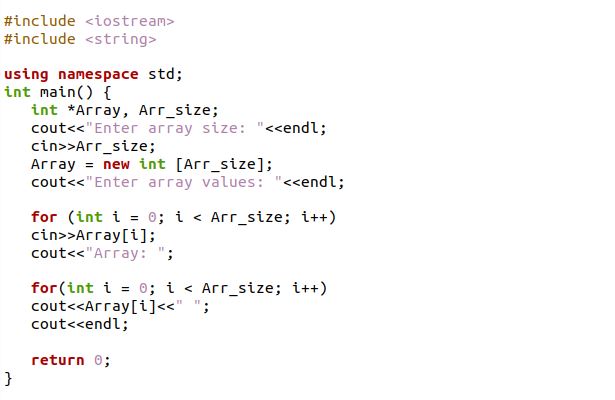 The shell displays a message for inputting the array size after compilation. When the user input the size of the array then, the shell asks the user to set the values for the array. The size of the array and its elements are accessible as follows. Hence, we can implement a variable-length array in C++ without a forbidden exception.

The C++ STL provides a vector as an alternative to variable-length arrays. It’s suitable for a variety of applications. It will be more clear with the C++ program, which we have implemented below.

As we have to use vectors in our program. So the most important part is to define the vector as a header file at the top of the code implementation. We have added the vector file in the section of the header.

Within the program main, we have a vector class with type int, and the vectors class has a variable “v.” We have added five elements of type integer in the vector. After that, we have a for loop iteration cycle. Inside the for loop, we have declared an iterator to a vector with a new variable “it.” Then, the “it” variable has a begin and end function for displaying the elements of the vectors.

Example 3: Program to Implement a variable-length array in C++ by Using std:: vector

After including the vector library at the top, we have called the std::vector inside the program’s main function. The vector is declared as “numbers” and initialized with the five random numeric values. The variable “number” is again defined, which has three vector elements from the above-given vector container. The std::cout is used to display the length of the vector inside the variable “number” by using the size function.

The output shows the length of the specified vector array as follows.